‘Rainbow Nation’, ‘A World in One Country’, whichever strapline you choose the one constant when describing South Africa is variety. 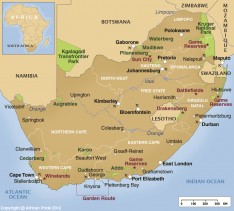 Whether it be the people, the scenery, the activities or the flora and fauna it’s hard to imagine any other country on the planet with such diversity.

Almost exactly 5 times the size of the UK, South Africa is a destination that warrants several visits, but if you only have one chance then we can tailor the perfect itinerary to make the most of your time.  Top of most peoples lists are Cape Town and one of the world-class safari areas.

Kruger National Park is undoubtedly the most iconic of the various game viewing areas, but there are many high quality alternatives such as the game reserves of the Eastern Cape, KwaZulu Natal and the North West Province which often tie-in better with certain tours.

Each Province of South Africa has its own unique attractions and reasons to visit.  Cape Town’s home province, the Western Cape, has much to offer including the Garden Route, whale-watching in and around Hermanus and the fine wines, fine dining and beautiful scenery of the Winelands.  Further along the Indian Ocean coast is the Eastern Cape where you can take in malaria-free game viewing and spend some time discovering the rugged coastline and endless beaches of the Wild Coast.  KwaZulu Natal has a huge range of temptations, from walking in the Drakensberg Mountains or relaxing on its beautiful beaches to the history of the Battlefields, where some of the bloodiest battles of the late 19th Century were fought, to the fantastic game opportunities.

Further north lie the Provinces of Mpumalanga and Limpopo where you will find the Kruger National Park and the private game reserves along its western border, forming the Greater Kruger area.  Johannesburg & Pretoria are in the state of Gauteng while the North West Province is home to Sun City and the Madikwe Game Reserve.

Some of the World’s most famous and luxurious rail journeys can also be found in South Africa: Rovos Rail, the Blue Train and the Shongololo Express.

Foreign Office: The Foreign,Commonwealth & Development Office (FCDO) issues travel advice on destinations, which includes information on passports, visas, health, safety and security. We urge you to visit their website before deciding to travel.