» Places to Stay in Seychelles

The archipelago spreads over 115 islands and on the main island of Mahe is the international airport and the capital town of Victoria. 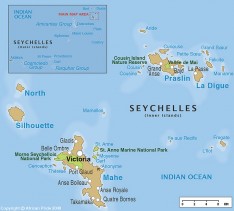 ​Visitors come for the tranquillity and relaxation, to laze on the pearl white beaches and swim in the emerald waters of the Indian Ocean.  A holiday to The Seychelles can be combined with a safari in Kenya, Tanzania or South Africa.

We do recommend that, if time permits, you visit at least two or three islands as each is so different and has its own charm and character.  Mahe is the largest island and is considered to have the most spectacular scenery with towering peaks, lush vegetation, cinnamon and tea plantations and around the coastline bays, beaches and coves.  The capital of Victoria has numerous Creole restaurants, craft shops and a colourful market.

The other islands can be reached from Mahe by boat or light aircraft: Praslin (15 minutes by air or 2 hours by boat) is the second largest island and is famed for its Coco de Mer plants which grow in the Valle de Mai.  There are a number of secluded beaches and fine hotels. La Digue (3 hours by boat from Mahe or 30 minutes by boat from Praslin) offers a very simple life style and the white sandy shoreline contrasts with the boulder strewn landscape. Bird Island (30 minutes by air) is, as the name implies, a bird lovers paradise and home to a million migratory sooty terns which breed here between May and November. It is also noted for its big game fishing due to the ocean dropping offshore to over 1,000 fathoms. North Island (one hour by boat or 20 minutes by helicopter) has until recently been uninhabited but now has an outstanding 11 villa resort retreat.

Foreign Office: The Foreign,Commonwealth & Development Office (FCDO) issues travel advice on destinations, which includes information on passports, visas, health, safety and security. We urge you to visit their website before deciding to travel.