Battlefield Tours, as developed by the late David Rattray at Fugitives Drift, are about so much more than just a battle. 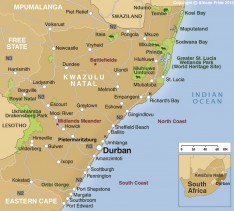 These events are imprinted on the psyche of both the British and the Zulu. These hills witnessed the first major military defeat inflicted upon the forces of the British Empire by colonised peoples, it is about the relationships between the British crown and its subjects, and between the white man and the Zulu.

The main battlefield sites are at Blood River, where the battle between the Zulu & Boer took place in 1838; Isandlwana & Rorkes Drift - where the British did battle with the Zulu in 1879; and Talana & Spionkop where British & Boer troops clashed in 1899 and 1900 respectively.

There are also interesting towns associated with these battles such as Ladysmith where British troops where besieged for 118 days and Mooi River where you can visit the area where a young Winston Churchill was captured in 1899 when the armoured train he was travelling in was derailed.