Used by many tourists as a stopping off point on the way to the Garden Route, it has enough to warrant further exploration. 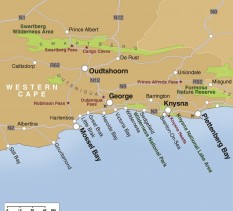 ​The Klein Karoo is a fertile valley bounded on the north by the Swartberg, and on the south by the Langeberg and Outeniqua mountains.

Herds of buffalo, elephant and kudu once dominated these plains but today the most visible animal in the area is the ostrich, farmed for its meat, eggs and feathers.  Stay awhile, however, and you’ll hear the rustlings of the bat-eared fox, the meerkat and the common barking gecko.

The Cango Caves, just west of Oudtshoorn, were discovered by a young Hottentot looking for missing cattle and extend underground for over two kilometres.  Formed as a result of 20 million years of rainwater scouring and dissolving rock and limestone to form halls and passageways, the caves were declared a National Monument in 1938.

Places to stay in Klein Karoo