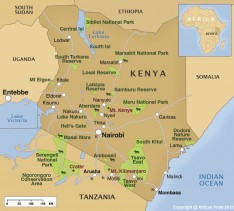 ​One of the more overlooked safari areas of Kenya, but with exceptional game viewing and a range of accommodation to suit all.  The Laikipia Plateau is a vast area in the north of the country stretching west and north from the slopes of Mount Kenya towards the shore of Lake Baringo, with the equator running right through it.

There are several wildlife conservancies in the area, such as Ol Pejeta, Lewa, Loisaba, Solio and Sabuk where the safari options are superb.  There are more endangered species found here than anywhere else in East Africa, for example Grevy’s zebra, Jackson’s hartebeest and wild dog.  As well as large herds of elephants and thriving populations of lion, leopard and cheetah you can also find rarer species such as reticulated giraffe, Somali ostrich and Beisa oryx.

Places to stay in Laikipia Plateau