There are over 30 National Parks and Reserves in Kenya - this is the most famous. 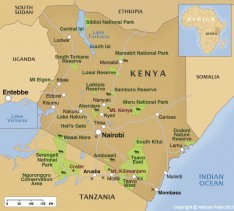 ​Game viewing in the Masai Mara, and in the conservancies which surround it, is exceptionally good throughout the year.

Notable, however, is the period between July and September when, dependent on the earlier rains, some 2.5 million plains game (particularly wildebeest and zebra) migrate into the reserve, followed closely by the big cats and other predators.

The Masai Mara is usually best visited by air from Nairobi and ideally one should stay in a combination of two or three camps over at least five nights, perhaps combining the Mara with camps elsewhere in Kenya or even into the Serengeti or Ngorongoro in Tanzania.

Places to stay in Masai Mara