» Places to Stay in Tanzania & Zanzibar 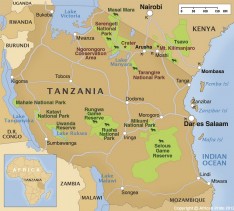 ​Ruaha National Park is situated in central Tanzania and is part of a more extensive ecosystem, which includes Rungwa Game Reserve.

It's relative inaccessibility has resulted in a park that takes far fewer tourists than almost any other area of East Africa.  The rewards of travelling this far are a wild landscape with baobab studded hills and rocky escarpments, playing host to excellent levels of game including superb predator concentrations and huge elephant & buffalo herds.

Ruaha National Park can be visited at any time of year. However, the best time for game viewing is during the dry season from June until December when wildlife converges on the dwindling water reserves of the park and concentrates along the Great Ruaha River, the only permanent water source in the park.