» Places to Stay in Zimbabwe 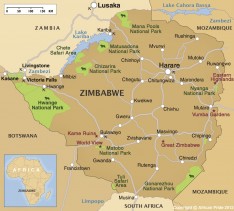 ​Bulawayo is Zimbabwe’s second city and the gateway to several of Zimbabwe’s main attractions, but it is well worth a night or two in its own right, rich as it is in both culture and history.

Just half an hours drive south of Bulawayo is the beautiful Matobo National Park.  Matobo means ‘bald-headed’ in reference to the huge piles of red-tinged granite kopjies (boulders) which litter the landscape.  Perhaps equally famous are the exceptionally well preserved rock paintings which date back over 2,000 years.