» Places to Stay in Namibia 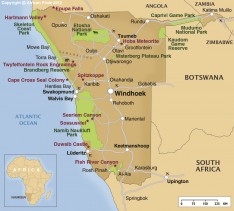 ​Damaraland is one of the most scenic areas in Namibia, a huge, untamed, ruggedly beautiful region that offers the traveller a more adventurous challenge.  Here there are prehistoric water courses with open plains and grassland, massive granite koppies and deep gorges.

Towards the west, the geography changes dramatically with endless sandy wastes, that incredibly are able to sustain small, but wide-ranging, populations of desert-adapted elephant, black rhino, giraffe, ostrich and springbok. These animals have adapted their lifestyles to survive the harshness of the sun-blistered, almost waterless desert spaces. Elephant move through euphorbia bush country, and can travel up to 70km in a day in search of food and water and unusually, do not destroy trees in their quest for food.  Follow black rhino cow and her calf in typical Damaraland 'melkbos' terrain. Together, Damaraland and Kaokoland are known as the Kaokoveld.

Damaraland is the old apartheid name given to the region south of Kaokoland and north of the main road to Swakopmund.  It extends 200km inland from the desolate Skeleton Coast and 600km southwards from Kaokoland. The name Damaraland is derived from the fact that the Damara people live in this area (they were relocated here in the 1960's).  The name Damaraland is still commonly used, although the entire region has now been renamed; the southern section now lies in the Erongo region while the north forms part of the Kunene region.

Places to stay in Damaraland