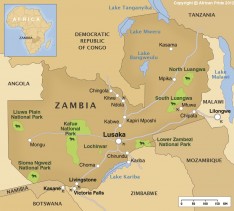 ​The closest reserve to Victoria Falls is Kafue National Park which extends to a staggering 22,400 square kilometres.

This enormous and underdeveloped pristine wilderness is home to an impressive variety of big game.  The spectacular Busanga Plains in the north of the park forms one of the country's most significant wetland resources.  Game viewing around Busanga Plains tends to be seasonal with June to November coming alive with vast herds of antelope and buffalo closely followed by the big cats.  In the south of Kafue the game viewing is year round.