» Places to Stay in Ethiopia

Unique amongst the countries we feature, Ethiopia is a captivating destination which will touch you with the warmth of its people. 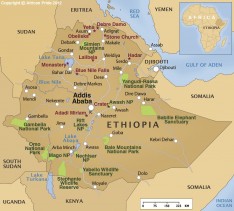 ​​Fascinating historical stories and myths seem to be woven into the fabric of the country – dating as far back as King Solomon and the Queen of Sheba.  Ethiopia was one of the earliest countries to adopt Christianity and the ancient capital of Axum (where legend has it that the Ark of the Covenant is housed), the rock-hewn churches of Lalibela and the castles of Gondar map out the journey of the early Christian Orthodox church.  By way of contrast the eastern city of Harar offers an insight into the Muslim community and the Omo Valley presents the tribal side of the country.

The landscape and the wildlife are equally memorable with some arguing that the Simien Mountains are the most spectacular mountain range in Africa.  The wildlife population may not be as large as, for example, neighbouring Kenya but the opportunity to see some of the country’s endemic species such as the Gelada baboons, the mountain nyalas, the Menelik bushbucks and the famous Ethiopian wolves make for a rewarding experience.

Foreign Office: The Foreign & Commonwealth Office (FCO) issues travel advice on destinations, which includes information on passports, visas, health, safety and security. We urge you to visit their website before deciding to travel.